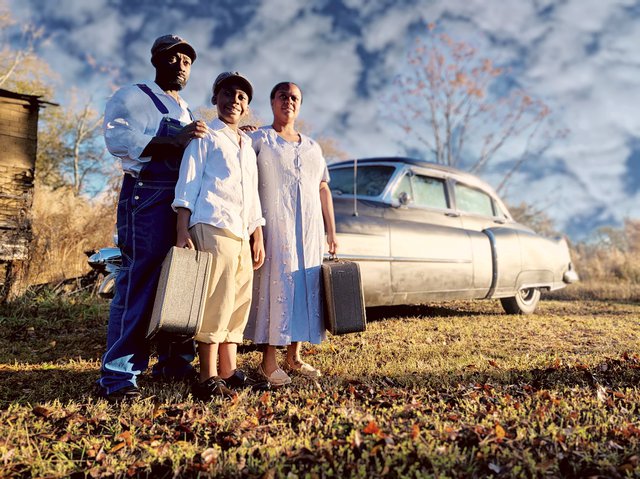 Carl Cochrane, producer, director of photography and show editor and owner of Mad Scientist Productions in Atlanta, said their dedicated and passionate cast and crew were really what brought the show’s vision to life.

Cochrane carefully selected each of the cast members, keeping in mind that they wanted people on the team who would truly honor the residents of Oscarville and bring the story to life in a way that resonates with the public.

“I wanted to throw the heart out,” he said. “I wanted to start people who, when you tell them the story, do the research themselves or have such a love to share it, that it goes through the characters.”

This first season also features Sean Harris and his family playing the fictional Harris family in the series. He plays alongside his wife and two children.

Mackey said it was the family’s first time performing for television, but “they’re amazing.” He said Sean captures the story and the character perfectly, using his heart and passion to share some of the local history.

“He captivated all of my wishes,” Mackey said. “And his son, his wife, and his daughter, they rehearsed together over and over again.”

While the rest of the team have nearly a decade of cinematography and production experience, Mackey said it was their first foray into television as well.

After writing the script for the series, he decided to take on the roles of executive producer and co-director, starting a big project outside of his 15-plus-year career with children.

He was able to appear on television for the first time in February this year, taking his business partner with him on the set of the television series “Shark Tank” to show off their invention, the Yono Clip.

Other than that, Mackey had never written a screenplay or been in a production. He started the project entirely out of a passion for history and people.

And he took the opportunity to try to open a space for lesser-known local talents to participate in a major project.

“If you can bring the team together, it’s unlimited hearts that you can inspire,” Mackey said. “I want to put people to work. I want to give people a chance.

Above all, Mackey and the rest of the crew agree that they want to make sure the stories of those who lived in Oscarville are heard and educate others about the local history they may have forgotten. Together, they hope to pay homage to history while paving the way for a better future in Forsyth and Hall counties.

“For us, it was always Oscarville,” Mackey said. “You have to start there. “

Stay tuned for Part 2 of this series for more on why the cast took on this project and what really happened in Oscarville all those years ago.