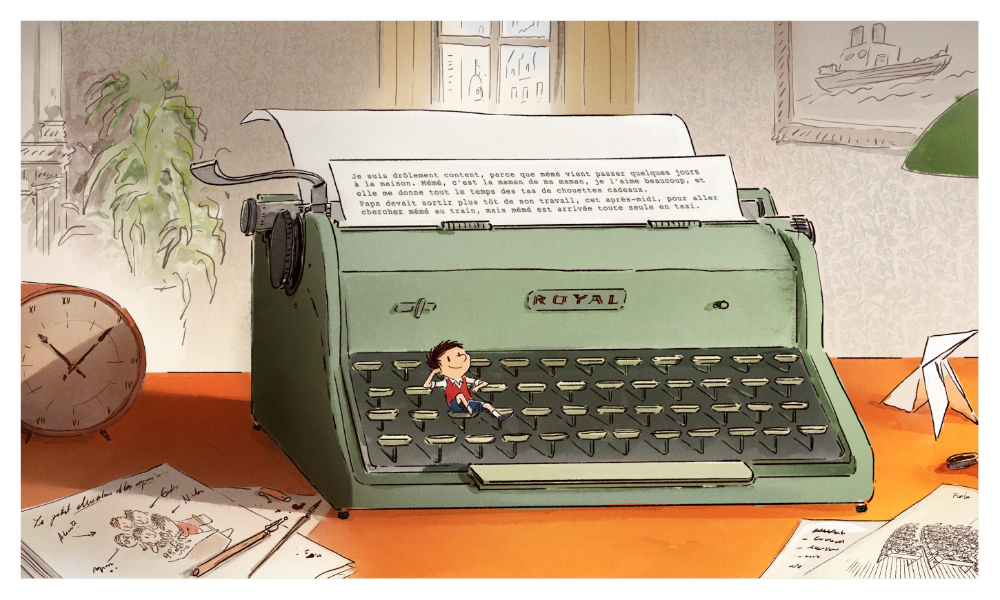 “Little Nicholas – Happy As Can Be” won the Cristal Prize for Best Feature Film at the Annecy Animation Festival this year, an award that can be a springboard for an Oscar nomination, as was the case with “Flee ” last year or “I Want My Body”. ” in 2019.

But the biggest winners at Annecy this year have been the Festival itself, animation in general and, when it comes to film awards, France in particular.

Directed by Benjamin Massoubre and Amandine Fredon, the Annecy feature film winner is a classic French animated feature film in artistic and industrial craftsmanship: 2D, based on a literary source – the comic strip by writer René Goscinny and illustrator Jean-Jacques Sempé, and featuring the famous Gallic intellectual property: Le petit Nicolas, the quintessential French schoolboy, who meets here his creators, Goscinny and Sempé.

In terms of industry, “Little Nicholas” is produced by Aton Soumache and producer of “The Little Prince”, whose company on “Little Nicholas”, ON Classics, is part of the Mediawan fold. Charades handles worldwide sales rights. BAC by David Grumbach distributes in France. The Luxembourg company Bidibul Productions is co-producing.

Soumache, Charades and Grumbach are the protagonists of the French animation scene.

“Little Nicholas” may seem exquisite at times, but, family fare, has a more modern pace and entertainment focus than a lot of arthouse 2D cinema.

The Cristal top for “Little Nicholas” surprised some. ‘Unicorn Wars’, ‘Blind Willow, Sleeping Woman’ and even ‘Nayola’ by Portugal’s José Miguel Ribeiro were all mentioned during the week as competition favorites.

As the awards progressed, the ambitious artistic project “Blind Willow” – a feature film that mixes rotoscoping, 2D and 3D, freely mixing short stories by Haruki Murakami – had to settle for a mention from the jury.

Loved by stop-motion fans in Annecy, “No Dogs Or Italians Allowed” – directed by Frenchman Alain Ughetto and based on the setbacks of his grandfather, an Italian immigrant – won the festival’s jury prize and a prize of the GAN Foundation.

From June 13 to 18, the 2022 Annecy International Animation Film Festival issued 13,248 accreditations, including MIFA market badges, 8% more than in 2019, its historic record.

Such record attendance “simply reflects the importance of animation cinema in the world: a major art and an industry of remarkable agility and constant evolution”, declared the Annecy director Mickaël Marin during the closing ceremony of ‘Annecy.

The reasons for this development are legion, laid out by Marin and other analysts at the start of the festival.

The Annecy feature film competition is only part of a much larger festival and MIFA market. Last week, the American animation giants came, mingle, be seen and conquer. It cut several ways. The world premieres “Minions: The Rise of Gru” and “The Sea Beast” from Netflix/Sony Imageworks were enthusiastic.

In a first look at “Strange World,” Disney revealed what appeared to be, from an unveiled flirtation scene in Annecy, the first queer main character of color in its history.

Technique often dazzled, led by the new villain of “Spiderman: Across The Spider-Verse”, The Spot, who goes from rough character design to fully fleshed out visuals as his evil builds, and all the cinematic force brought to “Pinocchio,” in lighting, costume, camera movement, exhibited in unseen sequences unveiled in Annecy.

“Animation is not a genre,” shouted Del Toro as he introduced his first animated feature. When manipulated by filmmakers such as Del Toro, it becomes a cinema in its own right.

The world’s biggest animation event has also reportedly marked a shift in platform production as OTT giants shift from volume production to creating premium series, often based on classic family intellectual property. “Gremlins: Secrets of the Mogwai” by Amblin/Warner Bros. Animation is a wonderful example of this. Announced on the edge of Annecy, the European slate of Netflix risks giving up others.

Meanwhile, Europe is turning more and more towards adult animation.

Especially for its on-site audience, industry executives and producers, the main excitement in Annecy remained its MIFA pitches and short films.

Industry awards went to some of Annecy’s most acclaimed titles: “La Calesita,” a warm tribute to the community values ​​of Reel FX and Argentinian Augusto Schillaci; “The Queen of Foxes” by Swiss Marina Rosset, a feel-good parable of love drawn with stunning impressionist watercolor backgrounds.

Annecy 2023: Mexican animation in the spotlight

In town to present “Pinocchio” for Netflix and satisfy his love of animation, Guillermo del Toro had already announced that Mexico would be the country invited to Annecy in 2023. Jorge Gutiérrez, creator of “Maya and the Three”, will produce the poster for the 2023 festival. “Mexican animation is little known and deserves to be the subject of a great national panorama”, declared Annecy artistic director Marcel Jean.

CRYSTAL FOR A FEATURE FILM

PRIZE FOR A FIRST FILM

CRYSTAL FOR A SHORT FILM

“A dog under a bridge” (Rehoo Tang, China)

CRYSTAL FOR A DIPLOMA FILM

Animation “out of bounds”

PRICE “OUT OF LIMITS”

CRYSTAL FOR THE BEST VR WORK

JURY PRIZE FOR A TV SPECIAL

JURY PRIZE FOR A TV SERIES

CRYSTAL FOR A TV PRODUCTION

JURY PRIZE FOR A COMMISSIONED FILM

CRYSTAL FOR A COMMISSIONED FILM