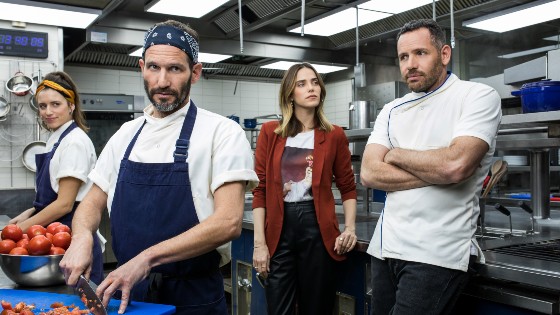 Nimrod works in the kitchen of a prestigious restaurant run by the brilliant chef Dori, who struggles to remain relevant and to maintain his place at the top of an ultra-competitive gastronomic universe. The series explores toxic masculinity and the fragility of the male ego through the juxtaposition of two male characters. The new cook is a family man collapsed under the weight of his responsibilities and his mundane experience, while the chef is single, hedonistic and self-centered, seemingly at the top of his game.

The first three episodes of this gripping series premiered at the 33rd Annual Boston Jewish Film Festival in November. We are now offering you the chance to watch the entire first season of “The Chef”.

Note: This selection is only available to residents of Massachusetts.

CJP is providing the above links to third party events for your convenience only. CJP has no control over the content of any linked websites or the events they describe, and accepts no responsibility for any websites, including any advertising or product or service on or available from such websites, or for any loss or damage that may result from your participation or registration to attend the events described. If you decide to access any of the third party websites linked below, you do so entirely at your own risk and subject to the terms of use of those websites and participation in events. CJP is not responsible to you or any third party for the content or accuracy of any material provided by third parties. All statements and / or opinions expressed in related materials or during the events described, and all comments, articles and other content provided on third party websites or during the events, are solely the opinions and responsibility of the persons or entities operating related websites and events. The inclusion of any link on this website does not imply that CJP endorses the event described, or the linked website or its operator.
FOLLOWING