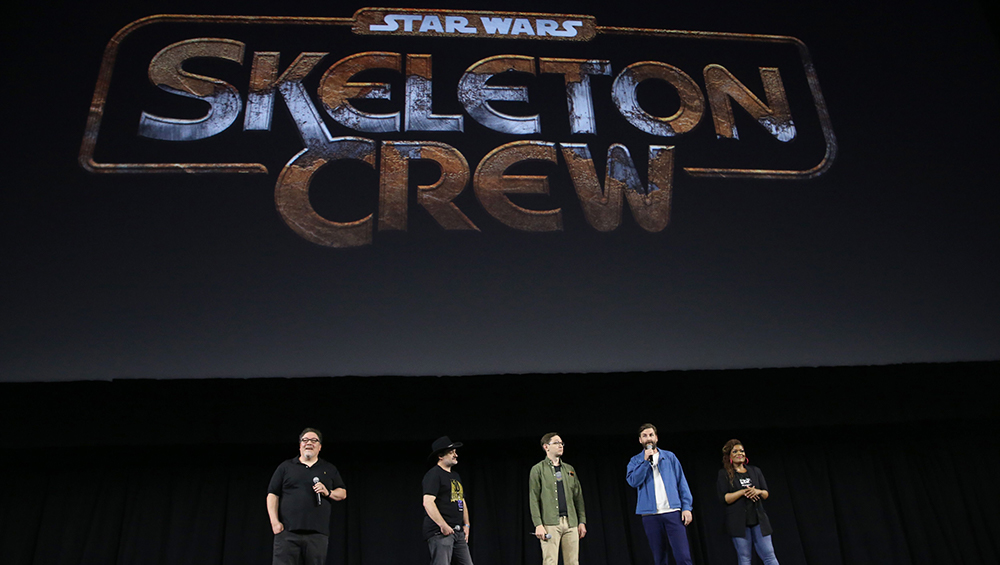 California is getting into the “Star Wars” business, with the state committing $20.9 million in tax subsidies for a new Disney+ series called “Star Wars: Skeleton Crew.”

Recent “Star Wars” movies were filmed in the UK, where they receive government funding. But four other “Star Wars” TV series, including “The Mandalorian,” were filmed in California without receiving state incentives, according to California Film Commission records. The shows – the others are “The Book of Boba Fett”, “Obi-Wan Kenobi” and “Ahsoka” – have all shot at MBS Media Campusa state-of-the-art sound installation in Manhattan Beach.

“Skeleton Crew” is also filming rumor on site, which is equipped with ILM’s StageCraft technology.

It will be the second most expensive TV show ever funded by California’s tax credit program, behind only “Penny Dreadful: City of Angels,” a Showtime historical drama that ran for one season in 2020 and received 24 $.7 million in state incentives. ‘Skeleton Crew’ will get slightly more than the third season of ‘Star Trek: Picard,’ which got $20.6 million, and ‘Westworld,’ which got $20.5 million for seasons 4 and 20 $.3 million for season 3.

‘Star Wars: Skeleton Crew’ is set to debut next year on Disney+ and will be tell the story of four children seeking to return home to the “Star Wars” universe. It’s one of seven television series that earned a total of $90.8 million in credits in the California Film Commission’s latest round of awards.

The state announced the recipients Monday. The other six shows are from Warner Bros. Discovery, Netflix and NBC.

Warner Bros. Discovery, owner of HBO, received the majority of the total allocation, with $49.8 million spread across four shows. Two of them — “My Glory” and “Presumed Innocent” — are Apple TV+ shows that Warner Bros. Television produced with JJ Abrams’ Bad Robot Productions.

The new allocations come thanks to the California legislature, which agreed last year to inject an additional $180 million into the two-year program.

The program was significantly expanded in 2014 as elected officials sought to tackle “runaway production”. Proponents are pushing for further expansion this year, which they argue is necessary to prevent jobs from leaving the state. The State Legislative Analyst has warnedhowever, that some productions will receive a tax credit even though they would have shot in California anyway, thus reaping a “windfall” benefit.

California’s program was designed to attract shows that are already running in other states. Moving shows receive a credit of 25% of their qualifying production expenses in their first season in California, compared to 20% for new or recurring shows. Once a show has earned a credit, it is guaranteed to receive a 20% credit for all future seasons.

By 2019, the program had become so crowded with recurring shows that there was no more funding available for new ones. The recent legislature appropriation allowed the program to re-issue grants to new shows for the first time in three years.

In addition to “Star Wars: Skeleton Crew,” these shows include “The Sympathizer,” an HBO series starring Robert Downey Jr. ($17.5 million in credits) and “The Residence,” a Netflix series set in the White House of producer Shonda Rhimes ($14 million); with “Presumed Innocent” by Abrams and David E. Kelley ($12.1 million) and “My Glory,” starring Jennifer Garner ($7.7 million).

Issa Rae’s HBO series “Rap Sh!t” will also receive a $12.6 million grant to relocate to California. The show centers on a South Florida rap group and the first season was filmed last year in Miami. “Killing It,” the Peacock series starring Craig Robinson, will also receive $6.2 million to relocate from Louisiana. It is also set in Florida, but Florida has no state incentive for filming.