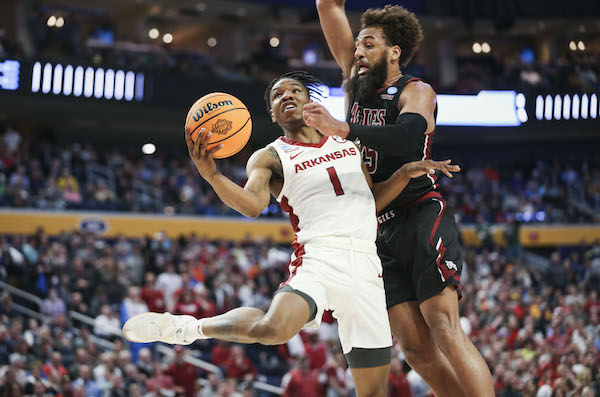 FAYETTEVILLE — Kickoff time has been set for Arkansas’ game against Gonzaga in the Western Region semifinals.

The Razorbacks and Bulldogs are scheduled to start at 6:09 p.m. Central Thursday at Chase Center in San Francisco. The match will be televised by CBS and called by the network’s A-Team consisting of Jim Nantz, Bill Raftery, Grant Hill and Tracy Wolfson.

Gonzaga (28-3) is the No. 1 seed in the tournament and advanced with wins over Georgia State and Memphis in Portland, Ore.

Arkansas (27-8) is the No. 4 seed and advanced with wins over Vermont and New Mexico State in Buffalo, NY

More from WholeHogSports: Musselman quickly turns the page on Gonzaga

The West Region is the only one in which the top four seeds have made it past the opening weekend of the NCAA Tournament. Arkansas and Gonzaga will be joined in San Francisco by No. 2 seed Duke and No. 3 seed Texas Tech.

The Blue Devils and Red Raiders will play after the game between the Razorbacks and the Bulldogs.

Arkansas and Gonzaga will play for the first time since the 2013 Maui Invitational. The Razorbacks beat Texas Tech 68-66 in the second round of the NCAA Tournament last season, and Arkansas hasn’t played Duke since the NCAA Championship Game 1994 when the Razorbacks defeated the Blue Devils 76-72.

The West Region and South Region matches will take place on Thursday. The Southern Region game between Michigan and Villanova in San Antonio will begin 20 minutes after the start of the Arkansas-Gonzaga game and will be televised on TBS.